Out of the frying pan… into our stomachs!

Sophie Morris has the pancake for you, from sugar and lemon to spicy slice or vegan alternative 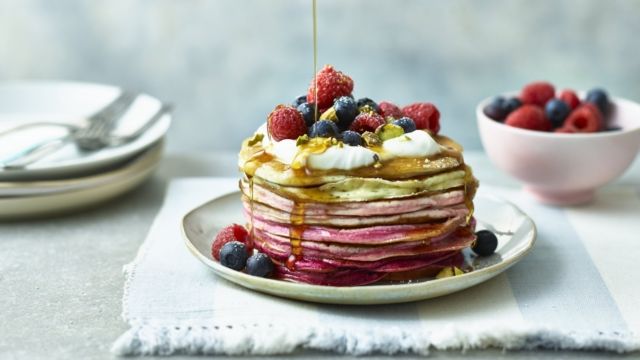 Shrove Tuesday is a good excuse to feast on pancakes, whether you’re planning a Lent fast or not, but why limit yourself ? Pancakes are great every day of the year, and eaten far more often in many countries. Think of the French crêpe and the Mexican tortilla, both popular street foods intended for blankets of Nutella or warm burrito fillings.

JAPANESE
The okonomiyaki pancake is probably Japan’s best-known street food. It’s a savoury pancake, crispy on the outside and doughy through the middle, packed with veg - typically cabbage - and some protein such as chicken or seafood.

Toppings include mayonnaise, seaweed or bonito flakes and okonomiyaki sauce, a rich sweetsavoury condiment made with soy, sugar and tomato paste (see recipe for how to make your own).

HOPPERS
Another street food, this time from Sri Lanka. Hoppers are crispy bowl-shaped pancakes made with coconut milk and fermented rice flour and served with many different chutneys or curries, though the classic is a fried egg. String hoppers are nests of batter, built up into a sturdy pancake.

Chef Karan Gokani set out to popularise the dish in this country, and has even named his restaurants, Hoppers, after his favourite pancake.

VEGAN
Without the egg, a hopper is vegan, as are many pancakes. Using chickpea flour is one of the easiest methods. Mix equal amounts of the flour and water, a pinch of salt and fry in fat such as coconut oil. The chickpea flour gives flavour, protein and a great texture.

Chickpea water, or aquafaba, is the best egg-white alternative if you want fluffiness. In many recipes you can experiment with non-dairy milks, which each bring their own flavours to the mix.

AMERICAN
Fluffy American pancakes came to us via the sitcom, while in the nineties and the noughties, dinerstyle restaurants became popular, bringing with them the concept of brunch, and ideas like mixing crispy umami-rich bacon with sweet and mellow syrup. You need a recipe which works hard to get as much lift and fluff into the pancake as possible: plenty of bicarb and baking soda, egg whites whisked to soft peaks, and live cultures such as buttermilk, kefir or yoghurt. Patricia Trijbits, the Dutch-via-California founder of Where the

Pancakes Are in London, uses buttermilk (see recipe), and says you can use a mix of any flours, from plain to spelt and buckwheat.

PANCAKES FOR SHOWING OFF
You can’t beat a pancake for showing off - as the chefs on Instagram know well. Take Japanese “soufflé” pancakes. They are sweet and made with less flour than a regular mix along with lots of whipped egg whites - they should look like soft clouds on the plate.

A pancake base offers a canvas for any palette of filter-friendly toppings. You can also be creative with the batter.

Tesco has a recipe for pink ombré pancakes in which you make different shades of pink batter and stack to look like a paint chart. The supermarket has just published research claiming 76 per cent of us plan to cook pancakes today, with more than ever cooking from scratch instead of buying a mix. Executive chef Jamie Robinson recommends whisking your eggs first, then pouring all of the mix into a clean bottle before giving it a good shake to get a smooth consistency. Using a squeezy bottle with a nozzle makes it easy to join in with the novelty pancake trend, allowing you to “draw” your children’s favourite animals or characters.

Or go to Morrisons for a fiver off the Tefal Unicorn and Dinosaur pans (now £12), though they’re selling out quickly.

CLASSIC
Fancy the simple approach to pancakes? Whisk one large egg into 100g of sieved plain flour (with a pinch of salt), then slowly whisk in 300ml of milk. Fry the batter mix in melted butter and finish with a sprinkle of caster sugar and a squeeze of lemon. Sometimes, even on Instagram, less is more.

For the toppings 10 rashers of bacon, fried until crispy 200g blueberries Maple syrup METHOD You can make the batter the day or evening before using. And whatever batter is leftover, you can freeze. Mix the wet ingredients into the dry. It is best to use a spatula and make circular movements around the bowl, folding the wet ingredients into the dry. Stop as soon as the dry ingredients have been absorbed, it should be lumpy. Add the cooled melted butter into the mixture and fold slowly with a spatula until it has been absorbed. With a hand mixer, beat the egg whites until they form soft peaks, then fold these gently into the batter Heat your pan to a medium temperature and add the batter. When the underside is golden and the top has lost its liquidity, flip and cook till done. For each person, serve two pancakes topped with a drizzle of maple syrup, a sprinkle of blueberries and a couple of rashers of crispy bacon. Recipe from Patricia Trijbits, the founder of London-based restaurant Where the Pancakes Are

METHOD Heat one tablespoon of oil in a large frying pan, and stir-fry the chicken until cooked. Remove to a plate and wipe out the pan.

Cook covered for seven to 10 minutes until lightly set, then flip over using a spatula and cook uncovered for a further seven to 10 minutes. When cooked, the pancake should be piping hot in the centre - you might need to flip it over a couple more times, cooking for a few minutes. Remove to a serving plate and garnish with mayonnaise, okonomiyaki sauce, aonori seaweed flakes, and katsuo bushi bonito flakes.