Pearls of wisdom from the oyster expert

Oysters are having a moment, but Bobby Groves has been working with the molluscs for years. He tells Sophie Morris why they are not just for posh foodies 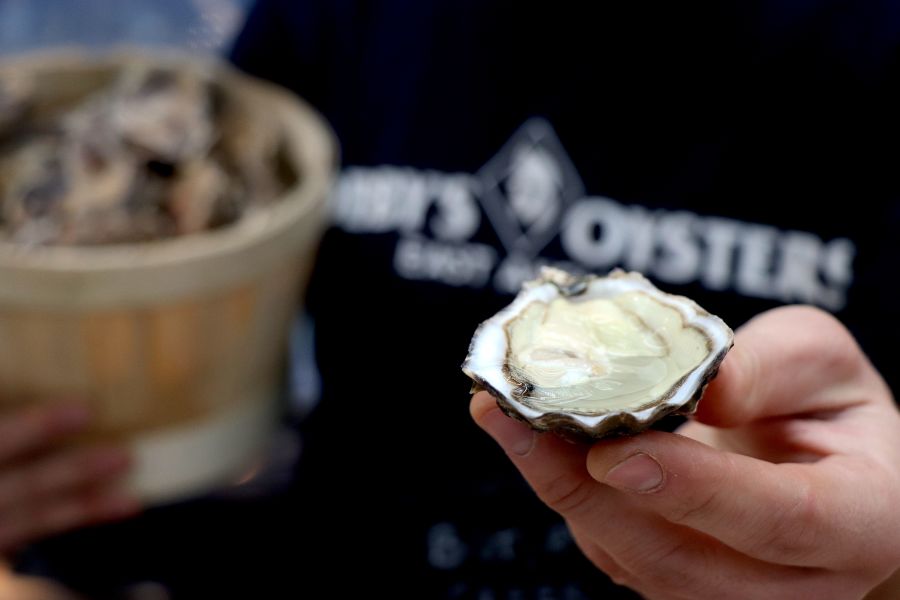 You’ve probably heard of terroir, the importance of provenance in winemaking. Bobby Groves (inset) is introducing me to merroir, a word describing the distinctive taste of oysters depending on where they have come from, and the specific conditions of the environment and climate.

“Achill Island in County Mayo is an unbelievably beautiful, wild and unrelenting place,” he explains of Ireland’s largest island. “The peat bogs there blanket the lowlands and run into the Atlantic, giving Achill oysters their unmistakable peat-based notes, which marry beautifully with the Atlantic salinity.

“It is everything that is great about Achill - wild, peaty, salty, sweet and charming, and it evokes a deep sense of connection with this historic, wildly rugged place.”

Bobby’s been working with oysters for half of his 32 years, and his story is as romantic a folk tale as you’ll find on our 21st century tides of dwindling fish stocks and polluted oceans.

He grew up in Maldon, Essex, on the shores of the Blackwater, the brackish river where oysters flourish in the bays of salt marshes and mudflats.

As a child he’d walk his border collie and go crabbing with his siblings. Then he worked on nearby farms: rolling fields, mulching hedgerows, grain carting. In 2006 came the catalyst for his current mission, when he was offered a job by Maldon Oysters, running their oyster shack in the town’s Promenade Park.

“I had always known of the oyster fishermen in Essex, but being involved with one was incredible - a little bit like living in the Champagne region all your life and then starting to work one day for Dom Pérignon,” he says.

Today he works not for Dom Pérignon but alongside plenty of it. He’s the “head of oysters” at the Chiltern Firehouse hotel in London, an establishment crammed to the gills with rock stars, Hollywood royalty, big name champagne and the best shellfish our shores can offer.

“Bobby’s Selection of Oysters” appears top of the menu and he’s also in charge of these saline, velveteen molluscs at sister properties in the US, including LA’s Chateau Marmont.

Oyster rider Bobby wanted to know more about the oysters he’s worked with for so many years. He wanted to see for himself the farms whose produce had passed through his hands thousands of times - from the Carlingfords in the north-east of Ireland, which he can recognise by the barnacles on the shells, to Falmouth’s sheltered estuary, where the native oysterbeds of the River Fal in Cornwall were preserved through the 19th and 20th centuries thanks to by-laws preventing mechanical harvesting.

He also wanted to show that oysters can be enjoyed by everybody, and how rich our tradition of oyster farming is. In early 2018 he set off on a 5,000-mile odyssey astride his Triumph Bonneville 1200cc motorcycle. The plan was to uncover the history of oysters in the British Isles, from his home town up to Brancaster on the Norfolk coast, across to Morecambe Bay and Anglesey’s Menai Straits.

Then it was over the sea to Ireland, the 12th largest oyster producer in the world. (The UK is 17th; between them France, China, Japan, South Korea and the US produce 90 per cent of all oysters.) On his return to England he dropped down to Cornwall and Devon, and then the Channel Islands, before completing his trip in the Kent towns of Faversham and Whitstable.

“I’d been to about 40 per cent of the places perhaps but a lot of it was uncharted territory,” he says. “In doing the journey myself, I gained a deep understanding of the industry and forged fantastic friendships.”

His resulting book, Oyster Isles, is a clever mix of food history, nature writing, travelogue and restaurant guide. Bobby visits around 40 oyster-growing areas, revealing the diversity of our coasts and the marine life living there.

He also celebrates aquaculture as a way of cleaning the oceans, as an oyster will filter 80 to 100 litres of water per day, feeding on the phytoplankton. They are also good for us, providing lots of protein, omega-3, and other nutrients.

Know your mollusc There are two main types of oyster in the UK, the native and the Pacific or rock oyster. Their appearances are distinctive. You’ll see the rock oyster with its deep teardrop shell most often. Natives are smaller, shallower and round. They are also much rarer and cost around twice the price of a rock.

Most of our natives perished due to overfishing and a lack of oystermen during and after the wars. Stocks were replenished with oysters from the Pacific ocean, hence the name, which can be eaten all year round.

The traditional warning about not eating oysters if there’s no ‘R’ in the month’s name - ruling out the summer - comes from the spawning time of natives, which leaves the oyster creamy, so this weekend sees the return of the native oyster season.

Oysters are definitely hip, but they don’t have to be high end, says Bobby. Casual oyster bars are opening all over the country, or you can buy your own. They’re not only to be enjoyed with champagne either. Try a Guinness if in Ireland; a single malt up in Islay.

Bobby admits he is evangelical about oyster culture and had a mission when he began his journey. But his hopes for oysters go even further: aquaculture enriches the sea and oysters offer a low intensity hit of protein.

They could feed our growing population and ease the pressure from intensive land use and meat production.

And if you don’t eat animal products you could explore ostroveganism, a semi-vegan diet which permits oyster consumption because they lack a central nervous system.

And according to Bobby, we should chew oysters. So there’s no need to open the gullet with a pronounced back bend, holding the oyster shell aloft before releasing the meat in one dramatic movement? Tip, slurp, gulp - and hope not to spatter our shirts in briny liquor, or a stain of the red wine vinegar or Tabasco we spotted it with shortly before the swallow? Nah. “Chew oysters like you would chew any other food,” is Bobby’s advice. “They are one of the world’s best foods, so take the time to extract the maximum pleasure from them.”

‘Oyster Isles: A Journey Through Britain and Ireland’s Oysters’ by Bobby Groves (£20, Constable) is on sale from tomorrow

2 Riley’s Fish Shack, Tynemouth, Newcastle
Dine facing the North Sea with the freshest fish and oysters from Adam Riley and his team in a converted shipping container. Explore my favourite English county, Northumberland, using Newcastle as a base. rileysfishshack.com

3 Loch Fyne Oyster Bar and Deli, Cairndow, Argyll and Bute
The original oyster bar on the banks of Loch Fyne, this place truly set the bar high 30 years ago and is still owned by the oyster farmers unlike the Loch Fyne restaurants nationwide. Stay at the George Hotel in Inveraray.lochfyne.com

5 Crab House Café, Chesil Beach, Dorset
Fun restaurant on Chesil Beach - or try its sister café Billy Winters, where windsurfers in Weymouth Harbour can entertain you as you eat.crabhousecafe.co.uk

How to eat oysters without shelling out
You can buy your own oysters from about 50p each.

Knock them together to see if they’re healthy. If they make a coconut sound it means that one shell is empty and the oyster is dead. They should sound like two stones knocking together.

Hold the oyster between a thick cloth to protect your hands. Use an oyster knife - Bobby Groves recommends a French brand called Deglon - to carefully prise open the pointed end. Once “shucked” it should smell like the sea, and not fishy or off.

Oysters are often served raw - still on their shell but loosened with a knife to make them easier to eat - with a mignonette or sauce. You can also poach or grill them, especially if you are not very confident with seafood.