Piggy in the middle

They’re this year’s Christmas food craze. But how many different ways can chefs and stores sell us pigs in blankets? Sophie Morris finds out 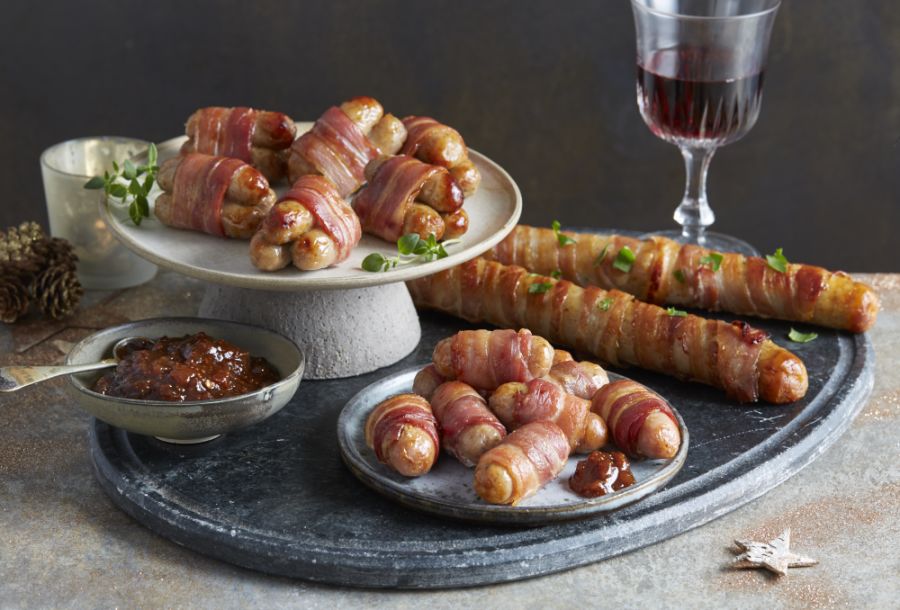 The first Christmas I spent as a vegetarian, I feasted on the sides with not a thought for the turkey. Roasties, parsnips, sprouts, chestnuts, red cabbage, bread sauce and cranberry relish filled my plate, and I didn’t feel short-changed for a moment.

But when I opened the fridge the next morning, the small dish of miniature pork sausages wrapped in their gleaming bacon blankets caught my eye. I ate the lot. Who leaves pigs in blankets hanging around at Christmas? This year, despite the popularity of vegan and vegetarian diets, these succulent porky mouthfuls are the “it” product of the festive season.

In previous years it’s been all about the Christmas sandwich, or we’ve gone potty over pimpedup mince pies. But for 2018, pigs in blankets have been identified as the festive stalwart ripe for regeneration. This means that supermarkets are looking past the staple chipolata in streaky bacon to introduce different meats and sizes.

Aldi has created a foot-long mega pig in blanket, which is joined on the shelves by Three Little Pigs, three mini sausages held in a stack by their bacon clasp.

Asda is fighting back with an even bigger sausage. Like the Aldi offering it’s a 12in beast of firm and flavourful meat, but with 500g of flesh compared with Aldi’s 200g, giving Asda’s girth quite a stride on its Aldi competitor.

The trademark double piggy flavour is also being tested out in other food products; pigs in blankets tea anyone? No, I’m not telling porkies: Sainsbury’s has created a Christmas Pigs in Blankets tea flavour, thankfully smoky lapsang souchong with sage and rosemary rather than actual sausage tea.

Not sold? Tesco, M&S, Pringles and Walkers are all selling pigs in blankets-flavoured crisps.

Costa is doing a pigs in blankets mac’n’cheese, and a “pigs tucked under blankets” panini, though Tesco’s attempt to rebrand sausage rolls as “pigs in duvets” feels a wiener too far. That said, in the US pigs in blankets typically refer to a frankfurter in a croissant or pastry, eaten for breakfast.

According to Kiti Soininen, the head of food and drink research at Mintel, supermarkets are always playing around with how they use traditional flavours, as well as looking to smaller stores for inspiration.

“There have been lots of iterations over the years,” she says. “Christmas tree crumpets and Christmas pudding ice cream being just a few of the many.

“In the last few years different advent calendars seem to have exploded to the market in so many areas - this year there’s even a gin advent calendar in Sainsbury’s; a few years ago those would have been at specialist stores only.”

This latest craze is not so much a revival as a makeover. Purists might favour a plain pork pig but those in the food world are championing alternatives.

Good Housekeeping has even named Co-op’s mini chorizo in pancetta its top variety for 2018, after sampling 18 different types. Waitrose has a venison version, and the Bury Black Pudding Company has a recipe for black pudding piglets.

A chef in east Kent has taken this trend and investigated, dissected, deconstructed and dismembered it. The result is Sausage Party.

Tomorrow evening, Jim Thomlinson will be serving 100 different types of pigs of blankets at the Cinque Ports, a seafront pub in Margate, where he’ll present plays on traditional PiBs such as a Weenie Wreath of 32 mini pigs in blankets and a two-metre long Cumberland sausage wrapped in streaky bacon.

He has also plundered his years of experience in Michelin-starred kitchens to present some more gourmet options, such as a chicken sausage wrapped in truffle slices, morcilla in pata negra ham and local Whitstable rock oysters wrapped in crispy prosciutto.

“There’s no doubt that pigs in blankets is a huge trend for Christmas this year,” says Emma Thomas, the creative director who’s organising the event. “Being the world’s biggest pigs in blankets fan I wanted to make my Christmas dreams come true and eat a menu that consisted only of this finest of foods. As soon as I started to talk about this I realised this was a dream for many.

“I think pigs in blankets are so huge this year as part of the trend for 1970s culture to become current. I think it’s also connected to the fact that they remind us of our childhood and we all crave a little bit of that at Christmas. Plus of course they are ruddy delicious.”

My vegetarianism lasted four years before I went back to eating everything. But for those who still don’t eat meat products, there are a few options, including quorn sausage in “facon” and carrots in puff pastry.

This sausage-fest is mainly aimed at meat-eaters but with a few sweet notes thrown in - including Twixes and Twirls wrapped in candied bacon. It’s only on for one night, but highlights from the Sausage Party will be available throughout the month, when you can choose from a rotating menu of 20 pigs in blankets.

Many of us moan about not liking turkey at Christmas, so it makes sense to give these tasty, unctuous, porky treats their time in the spotlight. Maybe in years to come we’ll worry the oven’s not deep enough for our sausage, rather than big enough for the bird.