Did suffragettes use terror to win women’s rights?

A new book by historian Dr Fern Riddell claims the suffragettes were far more violent than their reputation suggests, and that their campaign of bombing and arson has been hushed up because it wasn’t ladylike 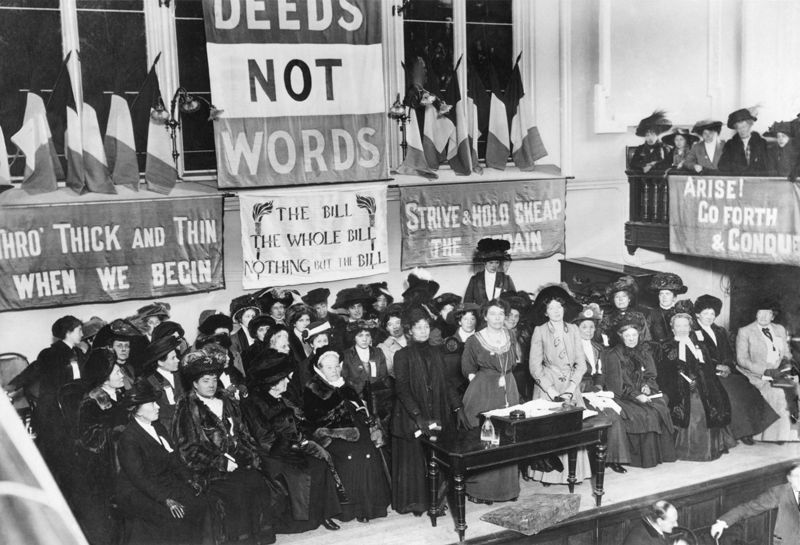 A suffragette meeting at Manchester’s Caxton Hall in 1908, wikimedia

In the early 20th century, when a suffragette set fire to a public building, sent a letter bomb, or, as happened on one occasion, horse-whipped a young Winston Churchill on Bristol railway platform, the incidents were described as “outrages”. But Emmeline Pankhurst described the campaign in far more serious terms, calling it “continued, destructive, guerrilla warfare against the government” designed to make “every department of English life insecure and unsafe”.

Suffragettes suffered for their cause, going on hunger strike and enduring repeated force feedings, but some members of the Women’s Social and Political Union (WSPU) made others suffer too. They were aggressors as well as victims, soldiers as well as suffragettes, as documented in a controversial new book by historian Dr Fern Riddell.

Death in Ten Minutes is a biography of Kitty Marion, an activist who was frequently arrested and was force-fed over 200 times in four months during one stint behind bars. You can read my review of the book in my Fiction section here (yes I know this isn’t fiction).

Working as a music hall actress and singer, Marion experienced frequent sexual assaults and attacks, and was sacked by an agent she refused to “kiss”. Her fury at the abuse within her industry led her to the suffragettes.

Riddell believes Marion’s story has been largely glossed over because of her violent direct action and beliefs about sex and birth control.

But Riddell also looks at wider violence carried out in the name of women’s rights more than a century ago. Churches, MPs’ homes, timber yards, cotton mills, racecourses and Edinburgh’s Royal Observatory were destroyed, she writes, adding how some victims endured terrible burns from chemical attacks.

Riddell describes these actions as terror attacks, a position which calls into question the sanctity of the suffragette movement - and has dismayed other feminist historians.

She claims that the violent militancy of the suffragettes was suppressed by its leaders, as well as by the group who put together the Suffragette Fellowship Collection held by the Museum of London, as they were afraid it would jeopardise popular support for commemorating the struggle. The fellowship has even been accused of redacting memoirs from the time to suit its own narrative.

“As conservative feminism took a vice-like grip of our history and the suffragettes began to sanitise their own history, the women who saw sex, freedom and independence as a universal right were ignored, as were the real lives and experiences of the women who had fought so hard and risked so much,” Riddell writes. “We need to understand that those who have sought to be in control of our history of women decided to only tell one story and to exclude those voices, those women’s lives, that did not conform. These are stories that need to be told.”

We hear a different perspective from Professor June Purvis, who has written biographies of Christabel and Emmeline Pankhurst.

Purvis - who disputes that Kitty Marion has been ignored by scholars - maintains that the suffragettes were opposed to any harm of human life, and committed acts of vandalism, not terrorism.

She says Riddell shows “very little sympathy” with the movement and argues that Riddell“provides no context for the violence that the suffragettes engaged in from 1912”.

Purvis says she has never come across evidence of loaded guns being used, which Riddelldescribes as “second nature” to the activists.

Riddell says that acknowledging the direct action of the suffragettes will help dispel the image of them as a group of humourless, sexless feminists, an idea that persists today. She is proud to combat what she sees as a sanitisation of the history of women, showing how they have not been only victims, but also fighters, lovers - and terrorists.