The FIGHT for the RIGHT to EAT BETTER

The ‘slow-motion disaster of the British diet’ affects every one of us, and not only those living in poverty, argues Henry Dimbleby, restaurateur and author of the ‘National Food Strategy’. By Sophie Morris 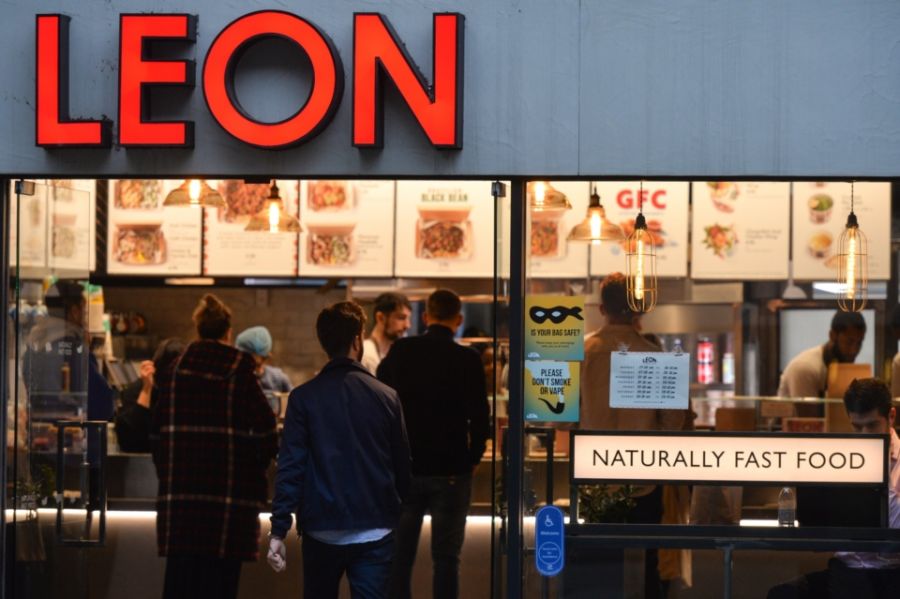 If you didn’t register the existence of the National Food Strategy (NFS) when it dropped quietly in the middle of summer, the chances are it appeared on your radar last week because of Marcus Rashford. The footballer has thrown his popularity behind three core ideas from the NFS, hoping to fight the hunger that so many British children wake up with every day. To do this Rashford has announced the establishment of a new task force - a group including major supermarkets, Deliveroo and charities FareShare and the Food Foundation.

“I remember the sound of my mum crying herself to sleep, having worked a 14-hour shift, unsure how she was going to make ends meet. That was my reality,” Rashford wrote in a letter to MPs. He also said that food poverty was contributing to “social unrest”.

This comes after the Manchester United forward shamed Boris Johnson into extending free school meals through the summer holidays, in June. The policies Rashford is now pushing are to extend the free school meal offering to any child with a parent on universal credit or the equivalent, to include these children in the holiday meals and activities programme, and to increase the value and reach of Healthy Start vouchers.

The Prime Minister’s spokesperson has said: “We will carefully consider the task force recommendations.”

“When this virus goes it will leave us with the economic scars, but increasingly those scars will show in the bodies and the prospects in the least advantaged of society,” says Henry Dimbleby, author of the new food strategy, founder of the “healthy” fast-food chain Leon (he remains a shareholder but has no operational role) and the son of TV presenter and journalist David Dimbleby. “It’s very hard to imagine for people who, like me, have not had to worry about feeding their children a diet that will help them thrive. Marcus has found voices to explain what it’s like to live behind the numbers. The basis of equality of opportunity should have the diet that helps people thrive as the bedrock of policy, not as an option.”

There have been plenty of false starts and reverse engineering of government recommendations this year. The National Food Strategy is no different. It is a Governmentfounded and funded initiative which hopes to convince itself to listen to the proposals of its very own report. The grand-sounding investigation was dreamed up by then environment secretary Michael Gove, who Dimbleby insists is far from being the “pantomime villain” he is often portrayed.

The pair became friends through Dimbleby’s earlier work on the School Food Plan, which picked up where Jamie Oliver and his school dinners campaign left off and has largely improved the food in schools across the UK. “Head teachers and cooks have done amazing things around the country,” Dimbleby says. “I do think there was a sense that talk about this kind of thing meant that you weren’t focusing on maths and GDP and innovation, and I think that’s changed.”

Dimbleby also founded the Sustainable Restaurant Foundation, is heavily involved in London food markets and is a shareholder in Mitch Tonks’ Rockfish restaurants in towns across the south-west of England. He was educated at Eton, a contemporary of Jacob Rees-Mogg, and Oxford. He lives with his wife - the journalist Jemima Lewis - and their three children in east London, but at 50 he finds himself “the only Leaver in Hackney. A lonely prospect.”

PIGGING OUT ON PERCY
Dimbleby’s recommendations to help the hungriest were prioritised because of Covid-19, but the first part of his report (the second is ex-pected in 2021) covers much more than food poverty. It aims to give a picture of Britain’s food system, from access and obesity to agriculture, trade and Percy Pig, and fight “the slow motion disaster of the British diet”. The sweet (inset right) earned Dimbleby headlines last month when he singled it out as an example of misleading marketing. The packet boasts of fruit juice-based sweets but they are packed with sugar, he complained. “Protect our right to eat Percy”, screamed some newspapers.

Marks & Spencer, which makes £20m from the product each year, said in a statement: “All our products have clear labelling so that customers can make informed choices about what they buy.”

Does he regret singling Percy out? “No!” laughs Dimbleby. “I am really interested in the response to it. I was trying to point out that the profit motives of companies and our genetic leanings [towards unhealthy foods] mean it is easier to sell, in greater volume, stuff that is bad for us.”

His call for a clearer framework for food packaging and in-store placement is supported by the chief executive of bakery chain Greggs, Roger Whiteside, who is on the NFS advisory panel, the former Sainsbury’s CEO Mike Coupe and departing Tesco CEO Dave Lewis. Dimbleby himself has been called a hypocrite for selling fast food as a healthy option at Leon, but believes this leaves him better placed to understand the lure of maximising sales.

Perhaps these contradictions are easier to admit with hindsight. “We want to do the right thing,” Whiteside states in the report, “but it’s difficult. Consumers won’t be dictated to I think you may need more regulation - a level playing field - because if I start making everything less appealing and other people are going the other way, then basically I am just opening up a vulnerable commercial front.”

Money and education can buy us better diets, but do nothing for doughnut cravings. Dimbleby admits to enjoying pickled onion Monster Munch and sometimes ending up at the lower end of the obese weight range himself.

The Prime Minister announced his obesity strategy the week the NFS was published. Banning the advertising of foods high in fat, salt and sugar (HFSS) before 9pm is a measure few will disagree with, Dimbleby says, and the economic costs are minimal. Boris Johnson is also banning “bogofs” (buy one, get one free) on HFSS foods and changing regulations on food labelling to include more calorie counts.

Tim Spector (inset), genetics professor and author of the book Spoon-Fed: Why almost everything we’ve been told about food is wrong broadly agrees with Dimbleby but believes time is critical. “I would have asked Boris to extend the successful sugar levy to all other sugary drinks, junk food and snacks. We need to start the battle now against cheap, bad food with misleading labels. I would move to a system like Chile where they ban cartoons and animals on sugary breakfast cereals and have a simple black spot on all poor quality junk foods and drinks.”

Perhaps we feel that if we all have a general idea what’s in a sausage or a curry or a stuffed crust pizza, we can make our own minds up about how to eat without risking medical intervention. Spector says this knowledge needs to be handed down from nursery school to university with proper education about food and nutrition. “This would cost a lot but would be cheaper than the huge public costs of obesity and type 2 diabetes we all face if we fail to act,” he says.

CHLORINATED CHICKEN
Many of the arguments about food quality lead back to chicken. Is it too cheap? Should we eat so much of it? Is it a cost-effective way of feeding a family a healthy, protein-dense meal or a loss leader for the junk food industry propping up obesity and intensive farming? Somehow, one plucked and peppered bird can straddle a high wire between unethical fast food, of-the-moment dude food and a wholesome Sunday lunch.

Chicken snobbery is rife. But we can’t all spend £15 on one spoilt bird.

At the moment, Britain is fixated on chlorine-washed poultry. It is said that a potential UK-US trade deal could result in chickens disinfected in chlorine being sold in the UK. The US permits chlorine rinsing of chicken, which is outlawed in the EU. A Which? report found that 72 per cent of consumers do not want chlorinewashed meat in the UK. Disinfected chickens have become a symbol of the poor food standards British people think America bathes in.

“People from less affluent households care about this the most,” says Dimbleby, “because they can’t buy their way out of these decisions. There is almost blanket support for maintaining food standards.” But he doesn’t suggest we ban specific products from entering the UK and points out that the World Trade Organisation forbids this. His idea is to create a new set of “core standards” for home-grown or imported food, which take into account environmental degradation, for example beef reared on deforested Amazon land, and animal welfare. Tariffs would only be reduced for products which meet our tough standards.

The report has been described as being too close to both industry and government interests, but Dimbleby insists it is “more radical than the current positions of most people” and balances high standards with positioning the UK as an attractive country to trade with. Because we have no experience as a trading nation (the EU has done this job for us for the past half century) we should submit any deals to parliamentary scrutiny. He is optimistic we can use our trading power to raise standards abroad. “We’re a big importer of food and our market is a prize.”

It is a few months until we leave the EU and we are yet to agree trade deals with our European friends.

But the pandemic has highlighted how worried all demographics are about access to food. “Five years ago you would have had people who denied the environmental problems of the food system,” says Dimbleby.

His own food nirvana includes “organic farms, solarpowered high-rise greenhouses growing fruit and vegetables in cities, rewilded landscapes, traditional upland farms weed-picking robots and blight-spotting drones” The coronavirus pandemic has changed how we eat. We went from consuming 25 per cent of our calories outside of the home to preparing every meal ourselves. Early excitement at cooking from scratch and eating family meals led to unhealthy snacking and weight gain. “How did we get to the point where our food is making so many of us sick?” Dimbleby asks in his report. He has questioned retailers, food producers, farmers, factory workers, academics and economists, as well as ordinary folk, to build his picture of Britain’s rotting food system. But the real enigma remains intact. Why are sweets pushed to children and why are intensive farming practices thriving, while families cannot afford or easily find fresh food for their children? As more of us wake up to the fact that obesity is not a poor person’s illness, and that immoral food and environmental standards affect everyone, we must hope the Government and the public is ready to listen to Dimbleby. And if not to him, then to Marcus Rashford.

FAST FACTS FOOD POVERTY
An estimated 8.4 million people in the UK struggle to get enough to eat, according to Sustain, the alliance for better food and farming.

A YouGov survey commissioned by End Hunger UK in 2018 showed that one in four parents in Britain has skipped a meal because they cannot afford it.

In June, the footballer Marcus Rashford pressured the Government into agreeing to continue free school meals over the summer holidays. The absence of holiday-time meals is a significant cause of food poverty.

As well as a lack of funds, food poverty can affect those without access to good quality food or the means or ability to prepare it.

We need to start the battle now against cheap, bad food with misleading labels