The acclaimed chef and restaurateur Josh Niland explains how to make the most of our marine meals and why we should carry on eating fish - but boycott catches from Japan. By Sophie Morris 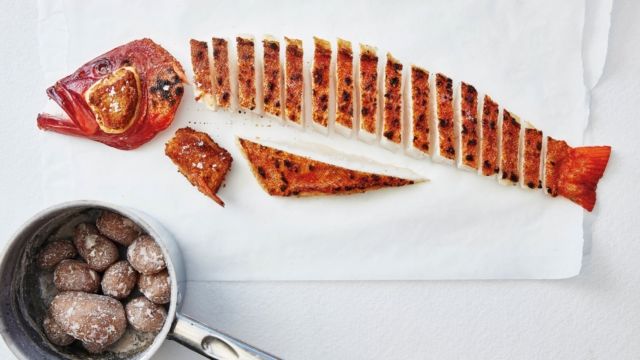 An image from Josh Niland’s book ‘Take One Fish: The New School of Scale-to-Tail Cooking and Eating’ (Photo: Rob Palmer)

All of these are ideas from the Australian chef Josh Niland, whose scale-to-tail or fin-to-gill approach to fish goes far beyond sucking bones dry.

Sydney restaurant owner Niland burst on to British horizons in late 2019, publishing his first cookbook, The Whole Fish, to international acclaim. The 32-year-old won prestigious industry accolades and praise from Jamie to Nigella and every other chef worth their saltwater.

But he also developed an image as the unapproachable clinician, dissecting his specimens in black rubber gloves in heavily-stylised photography with more in common with a forensics lab than a kitchen.

He included recipes in The Whole Fish only as “a gesture of the formality of writing a cookbook”, he says, acknowledging that this made for a “really intense” read.

It sounds like he’s kicked back a little during lockdown and rediscovered the connections between fine and casual dining and home cooking. His new book, Take One Fish, asks us to waste less and experiment more to get twice the typical yield out of a single fish. If we used 90 per cent of each fish instead of just the fillets most of us go for, we could leave half of them in the ocean, he says.

He describes Take One Fish as a “joyful, tangible offering”. The recipes are not for inexperienced cooks, but they are certainly more acces- sible. “I never thought I would have written a cookbook with a lasagne in it,” he admits. “There are crispy bits and burnt bits and me eating the food to show I’m human, not just this guy posing with his arms crossed.”

A decade ago, Niland and his wife, Julie, did a four-month stint - known in hospitality as a stage - in the test kitchen at Heston Blumenthal’s restaurant The Fat Duck in Bray, Berkshire. Both were offered jobs but turned them down.

“We wanted to make babies in Sydney,” Niland says, speaking to i from his home before heading to his kitchen, though in the midst of a strict Sydney lockdown they are preparing at-home meals only.

Today he has three children, two restaurants, a retail space and the books to his name, with Julie as CEO of the lot. It’s impressive. “I keep a pretty tight list of things I want to achieve in my life and I make sure I achieve them,” he says, with neither modesty nor the swagger baked into so many chefs.

What fires his ambition? His experience of cancer as a child has played its part. Niland was diagnosed with a Wilms’ tumour (a type of kidney cancer) at eight and several years of chemotherapy followed.

“My mum was cooking my lunch most days. I liked the gesture of a meal cooked by somebody else, and the ability of a meal to make me feel really good. I fixated on the idea of being a chef and have been cooking for 17 or 18 years.”

You’ll usually find him in his finedining restaurant Saint Peter or Fish Butchery, a fishmonger by any other name, which displays produce in glass cabinets as if they were Cartier watches.

Many people said it was a “stupid name for a fish shop” Niland tells me, but within the industry he was met with a “real sense of inspiration”. Why? Because he wants us to treat fish like meat, ageing it and curing it and using every edible morsel, in the manner of the nose-to-tail approach to eating animals pioneered in the UK by Fergus Henderson of St John, in Smithfields, London.

Of course, neither Henderson nor Niland invented eating offal and skin; they are reintroducing these ideas to mostly Western audiences.

Dry-ageing techniques, already widely used in parts of Asia, are becoming more common in the UK. There is five-day-aged turbot at Ikoyi in London (“If it isn’t the best restaurant in the world in five years, there’s something amiss,” says Niland), and tuna bresaola and trout pastrami at Fish & Forest in York.

Niland is also impressed by James Lowe, who pushed the wonder of prawn heads at Flor in London Bridge, by serving them on their own in a scarlet stack.

If a bit of crunch and slurp tickles your fancy, you’ll find whole cod’s head at both A Wong and Fallow, also in London. In Cambridge, deli and restaurant Fin Boys describes itself as a fish butchery and serves aged and unusual cuts of fish.

Is sustainable fishing possible? Niland presents a practical route to preserving fish and seafood for future generations, but can we really eat our way out of depleted stocks?

We have now entered the era of Seaspiracy, the headline-grabbing Netflix film which encourages us to give up fish altogether. The documentary shows the trauma industrial fishing inflicts upon marine life, from dolphin massacres to liceinfested salmon rotting in fish farms, and questions if such a thing as sustainable fishing can ever exist.

The film-maker, Ali Tabrizi, investigates transparency, accountability and the ethics behind not only commercial fishing but also major certifying bodies including the Earth Island Institute and the Marine Stewardship Council (MSC), often held up as the gold standard of stock intelligence and management.

Tabrizi concludes there is no such thing as sustainable fishing, that the only way to safeguard the future of our oceans - and our planet - is to give up eating fish and seafood altogether. “Obviously there’s no falsifying what got presented in that documentary,” says Niland, “but I think the overarching comment at the end - don’t eat fish - is a very biased opinion and I don’t think the solution. Over a billion people rely on fish as their main source of protein.”

Is there a solution? “Boycott Japan,” says Niland. Is he serious? “That’s maybe a harsh comment but the desire placed on one single fish species [bluefin tuna] needs to be alleviated.”

Take One Fish has 60 recipes for fish grouped into five sizes. Niland encourages us to eat more small fish such as sardine and herring, which recover their stocks quickly, but he includes large and extra large fish such as kingfish, tuna and swordfish because he knows people will use them and wants to share his approach.

With tuna, for example, Niland sees it as beef. His recipe for tuna lasagne involves mincing offcuts to use in a ragu. It’s a little more complex than a standard bolognese, but the effort pays off and I make a lasagne with rich umami depth and a meaty texture - comfort eating and an interesting new dish rolled into one.

“If we buy these more sinewy cuts for a lesser price, it’ll make us feel we can use tuna like this on a more dayto-day basis, because it’s not built up to be a really expensive and extraordinary experience.”

Fishy business Seaspiracy claims the certification marks on many tinned brands of tuna, as well as other seafood products, aren’t worth the ink they’re printed with, taking a particular swipe at the MSC which certifies over 400 fisheries worldwide, including many in the UK.

Tabrizi alleges that the organisation isn’t rigorous enough, and that its mission is impossible anyway because the oceans are a wild west where it’s dangerous for independent observers to do their job.

The MSC has published a detailed response to the Seaspiracy accusations, insisting that sustainable seafood is a reality and in fact a necessity to feed our growing population.

“One of the amazing things about our oceans is that fish stocks can recover and replenish if they are managed carefully for the long-term,” claims the organisation, adding that its assessment process is transparent and all fisheries must show evidence that they are “actively limiting unwanted catch”.

“While we disagree with much of what the Seaspiracy documentary makers say, one thing we do agree with is that there is a crisis of overfishing in our oceans. The need to harness our natural resources more responsibly is more urgent than ever,” said MSC.

“There will be a fish and chip option,” he explains ahead of opening last month, “but it won’t be a A$12 [£6] fish and chips. It will be A$30, and it will be perceived as expensive. Ultimately all fish is expensive.”

No doubt he knew his limitededition prawn hot dog, made from minced prawns and styled to look like a regular dog, would get the most attention. “People think that what I’m doing is so much more than it is,” he says. “It’s super-duper simple. When a pig comes to market there’s a plan for every part of it, yet plans don’t seem to be built around fish. I’m at the beginning of a long journey to make a difference in this field.”

‘Take One Fish: The New School of Scaleto-Tail Cooking and Eating’ by Josh Niland, with photography by Rob Palmer, is out now (Hardie Grant, £26)

To make the ragu, tie the thyme, bay leaf, peppercorns and star anise in a piece of muslin (cheesecloth) to make a bouquet garni. Heat 150ml (5 fl oz) of grapeseed oil in a large heavy-based frying pan over a medium heat, add the garlic and a pinch of salt and sauté for 30 seconds. Add the onion and another pinch of salt and cook for 10 minutes, or until the onion is translucent and beginning to colour.

Add the carrot, fennel and another pinch of salt and cook for 10 minutes until softened, stirring every few minutes. Stir in the tomato paste and fry for two minutes, then add the bouquet garni and red wine. Bring to a simmer and cook until reduced and thickened to a glaze consistency, about 10 minutes.

Add the crushed tomato and water, bring to the boil, then reduce the heat to very low and simmer for 45 minutes, or until the sauce is thickened. Season to taste with salt and pepper and set aside.

Heat 75ml (2½ fl oz) of the remaining oil in a cast-iron skillet or frying pan over a medium heat. Add half the tuna and fry, stirring to separate the strands, until coloured. Season lightly then add to the tomato sauce. Repeat with the remaining oil and tuna, and stir to combine. Leave to cool completely, then transfer to the fridge.

For the béchamel, put the milk and Parmesan rind in a saucepan over a medium heat. Bring to a gentle simmer, then reduce heat to low for 20 minutes.

Melt the butter in a separate saucepan over medium heat. Add flour and stir for two minutes with a wooden spoon to form a roux. Remove the Parmesan rind from the milk, then gradually add to the roux, whisking after each addition.

Bring the sauce to the boil, then remove from heat, stir in a little grated nutmeg and season to taste.

Closely cover the sauce with plastic wrap or baking paper to stop a skin forming, then refrigerate until completely cold.

Bake for 30 minutes, then remove the foil and cook for another 10 minutes until golden brown and bubbling on top.