Professor Tim Lang has spent more years studying Britain’s food supply chain than you’ve had hot dinners. He tells Sophie Morris why the nation is relying on a system that is in hock to supermarkets and dangerously complacent 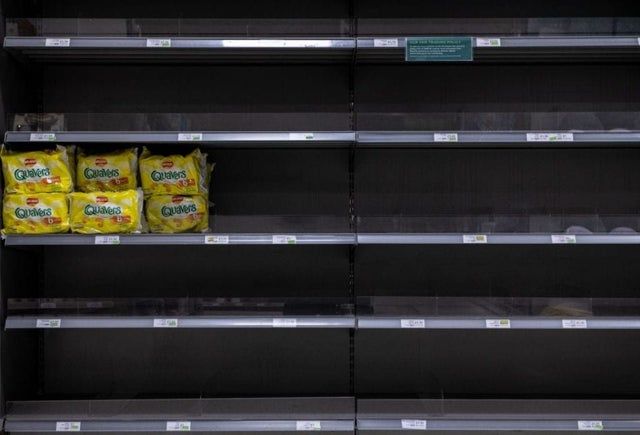 When I meet Professor Tim Lang, Britain’s foremost food policy expert, at a Sainsbury’s in south London, the shop is busy, but not remarkably so. The hand sanitiser is sold out, of course. Stocks of hand wash and loo paper are low. Though the pasta shelves are close to empty, there is plenty of food, from biscuits to ready meals to cereals and jars of sauces. There is fresh fruit from warmer climates. New World wines. Plastic packets of fresh herbs.

Sound like another planet? This was just three weeks ago.

“They’re a national food, crisps,” Lang quips when I point out that supplies appear low. It’s not really a joke, though humour is helping many of us through darker thoughts at the moment. It’s more a comment on the unhealthy, ready-prepared foods we rely on. These are the foods that have flown off the shelves in the past week, as raw nausea settles deep into the walls of our stomachs and psyches from the threat we could be holed up without a chocolate digestive or a Tunnock’s caramel wafer. “Alas,” he says, “this does not surprise me. Food is a vulnerable piece in the societal jigsaw. There has been no guidance, no forward planning for food rationing. So, while distasteful, people stocking up a little is in some respect rational. What are they to do?” Only a week ago, when empty shelves and supermarkets were the norm across the country, Environment Secretary George Eustice announced to MPs there was “significant resilience in our food supply chain”.

“This is dangerously complacent,” says Lang. “The food system is a stretched web of rubber bands which can unravel when splits occur.

Four decades of investment in just-in-time logistics was to cut storage and have seamless flow. Now we need storage, borders are imposed, delays occurring. The Secretary of State at Defra ought to be helping produce a health-based rationing scheme to put the country’s feeding onto a proper ‘we are all [in this] together’ basis.”

At the end of the aisle, we find several flavours of single-serve porridge pots. Lang picks one up as an example of the counter-intuitive ways we shop and eat. “This is a high value-added food for something that should be very simple,” he says, looking for the ingredient list. “Oat flakes, skimmed milk, sugar and flavouring,” he reads from the packet. “The British disease. Everything is sugared.” Fifty-seven per cent of the average British person’s diet comes from ultra-processed foods.

Born in 1948, Lang has spent much of his adult life researching food systems in Britain and around the world, after a stint as a hill farmer in Lancashire. He’s lived through rationing. He knows what it is to kill an animal (and hasn’t eaten meat since the BSE crisis). He has been Professor of Food Policy at City University in London since 2002, at the Centre for Food Policy which he set up himself in 1994. He is a founder and patron of Sustain, the food and farming network campaigning for a sustainable food system. He coined the phrase “food miles”. He practically invented food ethics in this country. I’m very much tempted to believe every word he says. But if ever we needed some sugary comfort food, surely that moment is now.

Few among us can claim to have foreseen how quickly the fissures in our hyperactive, over-extended food system would yawn into unknown gulfs. How shoppers would behave. What would run low first. Lang had a good idea of how it would play out. He’s long believed that supermarkets hold far too much power within our food system - too much power, too great a market share, far too much money. Between them, Tesco, Sainsbury’s, Asda and Morrisons control 70 per cent of all food retail in the country. Tesco alone claims 30 per cent - that’s almost a third of every bite we take - and four times the market share it held in 1979.

Lang’s vision, put forward in his new book Feeding Britain: Our Food Problems and How to Fix Them, is a more sustainable and equitable system, in which Britain doesn’t rely on imports. He wants to see the £226bn we spend on food annually distributed fairly through the ranks, right down to the growers. He says that leaving decisions to “Tesco et al” isn’t a food policy. And yet, last week, all that most shoppers had to go on were emails from supermarket chief executives explaining how many food items they could buy.

“The Government has had private discussions first with a small elite group of the food industry,” explains Lang, “and now, thankfully, widened. But nothing to the public. Nothing to guide local authorities or small shops. It betrays, I’m afraid, the failure to apply the lessons from the various approaches to no-deal Brexit, on which I and others urged change.”

Many people are making decisions right now about how to feed you in the coming months. In addition to supermarket bosses, there are the owners of your local café, there are the farmers wondering how to get crops in when labourers fall ill, or have no childcare. Food is by far the most trucked freight - 326 million tonnes in 2016. Who will drive these trucks as more of us self-isolate? As a nation, we are nowhere near to self-sufficient when it comes to feeding ourselves.

“A food system engineered on a three-to-five day just-in-time logistics can break down completely in less than a week, and clog roads for longer,” writes Lang. We’ve trusted supermarkets to have any item we want, at any moment, which Lang explains as a precise but incredibly risky management system, pioneered by Toyota and introduced to our weekly shop by Tesco. What even is a food system? Lang clarifies it as “the complex network of economic and societal relations which organises how food is grown, processed, retailed, cooked and consumed”. In other words, it’s so complicated, it can’t be simplified.

When Lang began writing Feeding Britain, there were no clues to the real shocks our country would be experiencing on his publication date, today. He delayed writing it after the 2016 Brexit referendum, knowing the complex withdrawal plans would deeply affect his field of study, even though the book isn’t about Brexit.

All this isn’t really about food, either, you’re thinking. It’s a healthcare crisis. But it was through food supply chains - about 50 per cent of our food comes from overseas - that the first clues to coronavirus arrived in the UK. The UK exports a lot of pork products, and in December 2019 these exports began to meet closed ports and factories in China. Then came issues here, with delays in imports of vitamins essential to manufactured fortified foods. In February, worries emerged about supplies from Italy, which ramped up production of ingredients such as olive oil, tinned tomatoes and pasta, while producers here began to stockpile.

These are examples of the many millions of ways in which our food culture interacts with other countries. Lang shows me the finished cover of his book, and the irony flows forth from the illustration of the British Isles drawn in spools of spaghetti, our nation brought together by bowls of quick-cook Italian wheat.

Much of our power to import food began with the British Empire. We ruled the seas and had the deep pockets to pay for anything to sail through them. Lang says that Britain has a food security problem. Our country cannot feed itself and knows this, but deludes itself with “residual empire thinking”, an arrogant, complacent and decidedly British belief that we will be ok. Because we are British. At present we produce about 60 per cent of our own food, but our food trade gap is enormous. We’re importing food worth twice as much as we export.

Lang’s view is that none of this should be left to the market. We all eat. Food security is an issue for all of us. A problem for society to address, not for globalisation to solve. Everyone in the industry, from supermarket bosses to potato farmers to warehouse packers deserves some sort of leadership, which should come from the Government. But the last time the British Government properly intervened in the food system was during the Second World War. After the financial crisis of 2007-8, then Prime Minister Gordon Brown tried to address the problem, creating various think-tanks which Lang sat on, but this came to an end with the election of David Cameron. Former environment secretary Michael Gove launched the National Food Strategy, an enquiry led by Leon restaurateur Henry Dimbleby, which promises to “look at the entire food chain, from field to fork”.

“I have a minor irritation with people who say this is the first review for years,” says Lang. “There was a twoyear review ended by the Tories. It was thrown away. The difference between now and then was that then thinking was, you’ve got to integrate land use and water use. Integrate farming with environmental things and food things. The Gove approach has been to separate them. That is a serious mistake.”

I was in the middle of setting up an interview with Henry Dimbleby when Boris Johnson asked us to stay away from restaurants and bars. I was promised a response from him but it has still not arrived. Meanwhile Leon had proved itself a worthy cog in the food chain, setting up makeshift shops and offering NHS workers 50 per cent off, before all restaurants and cafes were ordered to close.

“Appreciation of what happens when food is disrupted concentrates policymakers’ thoughts on how food is a matter of minds and mouths not just dry ‘market’ economics,” writes Lang. The coming weeks and months will reveal more on this. Do we want everyone to eat well, and affordably? Feeding Britain tells us how we could build a better food system, and shows that it is possible. There is plenty of land, but we need to diversify. We can still farm cattle, but need more efficient methods. We must rediscover our talents for horticulture, and focus efforts on increasing fruit and vegetable production in a sustainable way, instead of the post-war approach which was to squeeze as much food out of the land as possible without a thought for water use or biodiversity.

Lang is hoping for a “Great Food Transformation”. Is change really coming? “Change of something as enormous and complex as a food system can happen by crisis or choice,” he writes. “How we feed Britain matters. Whether we address our food problems is now a test not just for the food system but for democracy.”

‘Feeding Britain: Our Food Problems and How to Fix Them’ is out now (Pelican, £25)

There is no empire, nor armed forces, to protect long supply lines

The food economy is a just-in-time economy, without stocks

The food trade gap is enormous

Planetary ecosystem pressures are upon us

Food is a major driver of social inequities