We’re nuts for almonds, so why not walnuts?

California, which grows the bulk of these wrinkly nuts, reckons that we are ripe for finally making the most of this healthy food. Sophie Morris examines the culinary possibilities 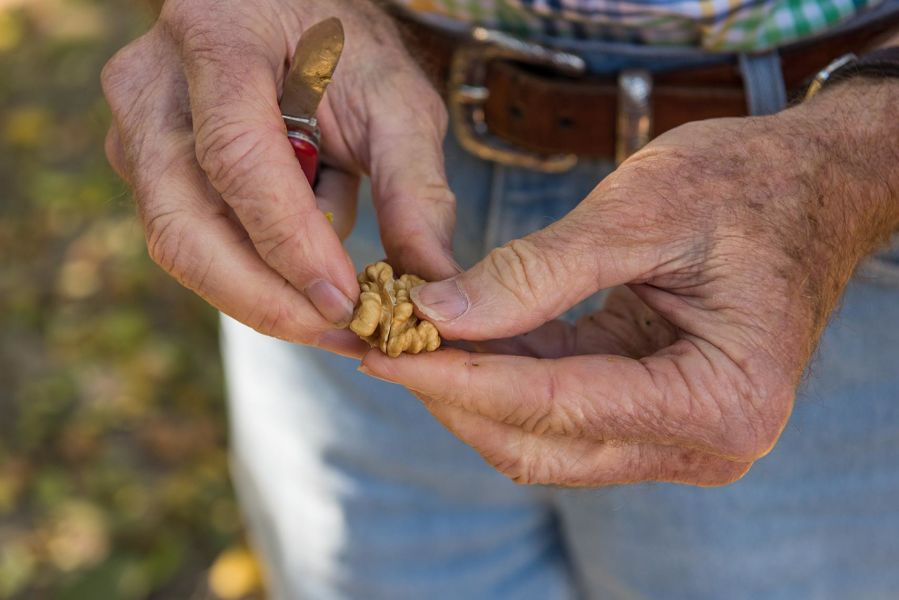 The walnut harvest in California runs from late September until November, but the nuts are processed and shipped throughout the year

Unless your walnuts are in the fridge or the freezer, you’re storing them in the wrong place, Pamela Graviet tells me. “We should treat them like fresh produce. People don’t know this, and they’ll buy a big bag on special offer, then be disappointed when the walnuts develop that bitter taste. I keep mine in the freezer, adding a few to a jar in the fridge whenever it’s getting low.”

Graviet is senior marketing director at the California Walnut Commission, and together we’re watching a piece of machinery known as a shaker grip the trunks of walnut trees and agitate them until a shower of fresh nuts hits the ground. It’s a cool October morning in the town of Hughson in northern California, 100 miles east of San Francisco. There’s a light mist in the air, pleasant conditions for outdoor work, especially under the cool orchard canopy, and a canal runs along one side of the trees: water is sacred in this scorched region, which yields more produce than any other US state by a huge margin, including 66 per cent of all walnuts traded globally.

It’s early days for this year’s harvest, which will go on until the end of November and is forecast to be 10 per cent bigger than last year’s, in line with demand. A mechanical sweeper, which, like the shaker, is operated by a driver, pushes the fresh nuts into rows for collection. These are Howard walnuts, one of around 30 varieties grown commercially. All are descended from the Persian walnut, the world’s oldest tree food, which dates back to 10,000BC in central Asia, and has been in the US since the 1700s.

Of California’s 350,000 acres of walnut orchards, I’ve come to the 1,500 acres farmed by Aaron Martella and his family, which sit in the fertile valley of San Joaquin. Martella is one of close to 5,000 growers in the state, and he also processes nuts for other local growers. “The walnut can be a finicky tree,” he explains. “It likes not too much, but not too little, moisture. We’ll shell and process this harvest until next June or July, and they’re shipped to almost every country in the world. Different countries like different coloured nuts, and we mainly export the lighter kernels and the dark ones stay here.”

When Martella, now 48, played college football, nuts were avoided because of their high fat content. Today we know more about good fats and bad fats, and nuts are considered an important part of a balanced diet. Walnuts haven’t enjoyed the popularity of almonds, or the exclusive cachet of , say,pistachios, pine nut and pecans, but they’re the only nut offering the health benefits of the omega-3 alpha-linoleic acid, which is why they can go bitter quickly. These polyunsaturated fats can help lower cholesterol levels.

Why aren’t we eating more walnuts? They have something of a retro reputation in the UK, belonging to the era of coffee and walnut cake and Walnut Whips, rather than veganism and wellness, but really the only reason we aren’t drinking walnut milk and smearing walnut butter on our toast is availability. California Walnuts tried to promote themselves in the UK over 20 years ago but soon gave up, concluding it “wasn’t ready” for a walnut-fuelled approach to healthy eating. Apparently we’re now ripe to have more walnuts in our diet.

The food writer and campaigner Yasmin Khan says a bad experience often puts people off. “People don’t know how to use and prepare them properly. When people don’t like them, I often say it could be because they’ve had walnuts that aren’t fresh. When you get good walnuts, you get a richness that isn’t available in an average almond.” “Walnuts are a key ingredient in Iran,” continues Khan, whose mother is Iranian. “In the way that in South East Asia people use peanuts as a base for soups, stews or marinades, in Iran we do the same with walnuts. They’re predominantly used in the north of Iran.” Khan’s first cookbook, The Saffron Tales: Recipes from the Persian Kitchen (£26, Bloomsbury) includes a recipe for fesenjoon, a rich stew made with chicken, pomegranate molasses and walnuts ground into a smooth paste.

“I was very lucky in that my grandparents were farmers and we had walnut trees in our family farm. When they were in season it was brilliant to go out and collect them, and come back and crush them and make dishes. When you get walnuts that are fresh they’re still incredibly soft and creamy. I guess because I’ve always been around them, they’ve formed an integral part of my cooking.”

Very fresh walnuts are also known as wet walnuts, because they are soft and almost juicy. There aren’t many walnut trees in the UK but they do grow here, so you may find wet walnuts in a farm shop at this time of year. Walnuts not eaten fresh would be dried and stored as a Christmas treat.

The obvious way to eat walnuts is raw or toasted in a salad, or in baking. In cult San Francisco bakery Tartine there’s a queue out the door for its bakes, which include chocolate chip cookies with oat and walnut, apple cake made with whiskey, apple butter and walnuts, walnut brownies, walnut crumble muffins and a walnut biscuit.

It also works well as a crumb, crust or sauce for veg, meat or fish. You could make a walnut pangrattato with crushed nuts, breadcrumbs, lemon and oregano, or use it in a pesto with mint or spinach, instead of the traditional basil and pine nuts. A Ligurian walnut pasta sauce is made from breadcrumbs, walnuts, parmesan and oil, and walnut oil itself is delicious, added to finish a plate after cooking. In the Middle East, muhammara, a dip made with peppers and walnuts, is very popular. Pickled walnuts and walnut ketchup show off their distinct flavour. Add crushed nuts to your porridge or a smoothie, and make a walnut ice cream with honey – just as delicious as pistachio or hazelnut, and much cheaper.