It’s hardly news to learn people like ice cream - but who knew we loved it quite this much? Sophie Morris looks into the remarkable rise and rise of the glacé and gelato business 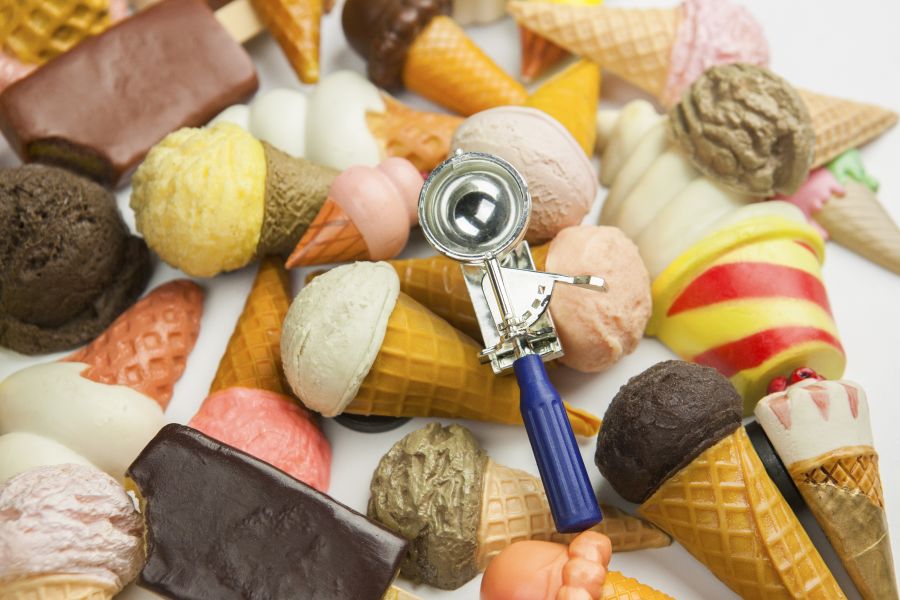 Ice cream magnets from the Bompas and Parr exhibition Scoop

I’m watching blue and green neon projections of my brain waves on a dark wall, and every five or 10 seconds they transform from pretty much straight lines into wild arcs and curves of delight. The reason for my mind’s excitement? I’m eating ice cream. Ben & Jerry’s new low-calorie variety Moophoria, to be precise Though I’m cynical about “fake” or “diet” foods, in this case I have to hand it both to Ben and to Jerry: a few licks of this stuff, while I’m being monitored on a special visualiser sponsored by the ice-cream giant, shows my dopamine levels spinning out in salted caramel-induced bliss.

“Ice cream is a guilty pleasure, isn’t it?” says Sam Bompas, one half of Bompas and Parr, the food impresarios behind a major exhibition about ice cream, where I’m trying out this new flavour.

“One of the reasons it’s so popular at the seaside is that it’s a space of transgression. Ice cream is an acceptable transgression, and people are trying to push the boundaries.”

Our love of ice cream is also pushing boundaries on Britain’s ailing high streets. In April, PricewaterhouseCooper took stock of 500 British town centres, and found that despite the struggles of the high street, ice cream parlours are booming. They have grown by 20 per cent in a single year, while overall, shops are opening at the lowest rate in seven years.

Remarkably, this boom in parlours is playing to every nook of the market.

In Camden market, north London, Chin Chin Labs prides itself on “looking more like a science lab than an ice cream parlour”, and customers watch their ice cream emerging to order from clouds of liquid nitrogen, in flavours of black tahini halva or violet. Across the city you can find La Grotta Ices serving scoops of papaya green chilli and lime or kumquat custard in Bermondsey.

In Manchester’s Northern Quarter, head to the first floor of Affleck’s Palace for the vegan malted coconut milk, or Chorlton crack, a blend of salted caramel and peanut butter.

Look past this kneeweakening array of incredible flavours and impressive innovation, and you’ll find the larger chains that are hitting the high street.

Creams, for example, is the choice du jour for young people meeting friends or dates. It styles itself as an “American-style dessert parlour”, and in just seven years has opened more than 70 stores, from Stockport to Staines, and Brentwood to Barnsley. The plan, it says, is to expand to 300 within five years.

Then there are the original Italian parlours, which have stuck with British tastes and weather through many boomand-bust cycles.

These are the stalwarts of our seaside towns, such as Morelli’s in Broadstairs, Kent, which has overlooked the town’s Viking Bay since 1932. It was the first parlour in the UK to offer over 20 flavours in a freezer on display to passers-by.

Today, visitors are almost as much in thrall to the original pink marble floors, leatherette booths and grand shell fountain as to the intense Kilimanjaro coffee or Alphonso mango ice cream and classic sundaes.

Morelli’s started out as a father-son operation in Scotland in 1907, and now has 18 branches worldwide. That it opened a new parlour in London’s Notting Hill last year is an example of our growing taste for frozen desserts, as well as places to spend social time that don’t revolve around alcohol.

Sharing a scoop of elderflower sorbet sounds sophisticated, but our ice cream eating habits are dictated by availability. For most of us this means a Magnum from the corner shop or supermarket.

When YouGov revealed its survey of Britain’s favourite ice lollies earlier this month, the results caused an uproar when the top five lollies were named as Magnums, Fabs, Soleros, Twisters and Feasts. Clearly, the purists complained, Magnums, Soleros and Feasts are ice creams, not ice lollies.

In people for and cream as Either way, they are all warm weather treats, and show sales hikes every summer, even in years less glorious go than this one. A recent wideranging industry report from The Grocer reveals that we are spending more money, and more frequently, on ice cream this year than last, even though prices are up by 6 per cent. Even during last year’s washout summer, ice cream sales were up £45m on 2016. Still, the place we most consistently enjoy ice cream is at home on the sofa: big spoon, big tub and a box set, year-round.

Ice cream is reportedly now being chosen as a “healthy” dessert option. We are buying both own-label and branded or luxury ice creams, and new areas such as dairy-free and alcoholic flavours are emerging, though it’s too soon to measure their staying power.

Ice cream trends come and go - a few years ago it looked like we were ditching it for frozen yoghurt, and Agnes Marshall’s seminal recipe book from 1885 includes recipes for spinach and curry ices - but it will always be in season.

Marshall’s The Book of Ices has been reissued this month to coincide with Bompas & Parr’s exhibition, Scoop: A Wonderful Ice Cream World. Visitors can also try out mini cones of glow-in-the-dark soft serve, make their own ice creams with some simple equipment in a mock-up of the Marshall’s 19th century cookery school, traverse its history from the popular penny licks which spread tuberculosis to the more recent Glasgow ice cream wars.

The exhibit, housed in London’s Kings Cross Gasholders, is part of Bompas & Parr’s British Museum of Food, a mobile museum that treats food with as much cultural significance as we do art, music and literature. It coincides with the 300th anniversary of Mary Eales’ Receipts, the first printed volume to feature ice cream in an English publication.

But the backbone of the exhibition is the private collection of Robin and Caroline Weir, ice cream fanatics whose book, Ice Creams, Sorbets and Gelati: The Definitive Guide, is the biggestselling ice cream book ever. The Weirs’ epic collection of more than 14,000 items of paraphernalia includes books, advertising, art, music and equipment, such as moulds in the shape of pineapples, birds, fish and flowers, and thousands of France go walk an ice just whimsical postcards depicting our long love affair with frozen, flavoured custard.

Britons the pub The flavours of the past are as unusual as recent innovations. At Scoop, you can walk through a sensory corridor and ingest the aromas of carnation, clove, aniseed and jasmine.

Earlier this year, the Aldwych icecream parlour in Glasgow announced a spicy Valentine’s Day special, respiro del diablo, which required customers - adults only - to sign a disclaimer before ordering. You won’t find these in supermarket freezers, but ice cream is easy to make. There are many books available, Amazon lists more than 1,000, but a standout publication came out last month, from Kitty Travers who founded La Grotta Ices and whose recipe collection bears the same name.

Travers trained at New York’s Institute of Culinary Education and worked for Fergus Henderson at St John, but her first love is ice cream and La Grotta joins the hand of an experienced chef with the mind of a magician and the heart of a toddler on a first trip to the seaside.

Travers has researched her trade in Sicily, Rome, Naples and beyond, but explains there is no mystery to a great ice cream. “The foundations of a perfect scoop are based on having the right quantity of water, sugar, fat, solids (proteins) and emulsifier in a recipe, all of which are found in milk, cream and fresh eggs.”

At the beginning of this century, following a Damascene summer eating ice cream in France, Travers decided to pursue it. She had tasted cherry, saffron, gooseberry and apricot, flavours she’d never seen in the UK, and appreciated how people went for a walk and an ice cream in the same ways Britons go to the pub. Yet there was nowhere she could learn about it in the UK.

Today she’s teaching droves of new converts how to churn at La Grotta and at Nottinghamshire’s School of Artisan Foods, And if we keep eating so much of the stuff, we’re going to need them.

OUR ICY APPETITE
Britain’s first “modern” ice house was built in Greenwich 399 years ago. It’s now 160 years since Carlo Gatti, a Swiss businessman, built ice wells just moments from today’s Scoop exhibition. He is credited with developing the ice trade in the UK, and the wells can still be seen at the London Canal Museum.

The foraging of ice can be traced back much further, to China as early as 1100BC. Greeks were gathering ice on Mount Olympus by 500BC, to sell at markets. A few decades before Gatti, Frederic Tudor, a businessman from Boston, made his reputation as the “Ice King” for selling ice from the frozen New England waters to hot countries including India, the ice blocks insulated en route in sawdust or rice chaff.

The first recorded mention we have of ice cream is on the menu of a huge feast given by Charles II in 1671, to celebrate a decade on the throne. Charles loved all things French, and the fashion for flavoured Persian sherbets or sorbetti had travelled from the East through Florence and to Paris by the 1660s. At some point these “sherbets” developed into what we now know as ice cream.