Chef James Martin has forthright views on Brexit, fancy cars, weight loss - and what he puts on his bread. By Sophie Morris 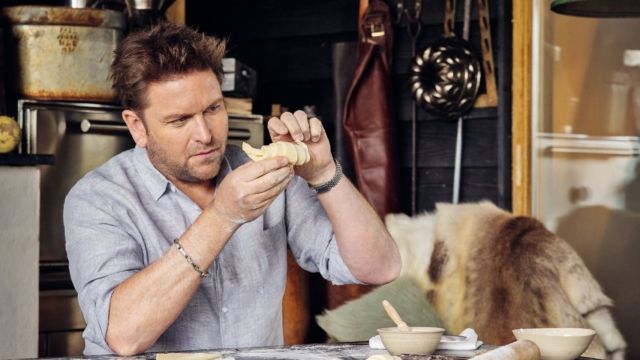 “People don’t want to be lectured at, told what to eat or told to go on a bloody diet in January,” says the chef. (Image from Butter by James Martin. Credit: John Carey)

James Martin is forthright on most topics. From Brexit to butter, weight loss and overwork, moany Britons and his beloved Yorkshire. But there’s one thing he won’t be drawn on - and that’s how many cars he has. He chuckles a few times but won’t give a number.

Maybe he regrets telling GQ magazine in 2019 that he owned 41 cars including an £800,000 vintage Ferrari. And that’s without counting his bikes. But he will admit, when we speak, that he is in an electric car, an Audi RS e-tron GT. “Elon Musk doesn’t need any money from me,” he jokes, though it is possible that he can’t be seen behind the wheel of a Tesla since he wrote a controversial column about using one to scare cyclists in 2009.

But that’s ancient history. Martin, now 49, tempers this flash exterior with an approachable manner and rolling banter. He has earned the shiny toys, working his way up from pot washer at Castle Howard, where his family farmed on the estate, to the finest French kitchens.

His chat has been perfected during his years of live television, presenting Saturday Kitchen on the BBC for a decade until 2016 alongside many other series. He also owns a number of restaurants - one in a Manchester casino, another in swanky New Forest spa Chewton Glen, and a chain of James Martin Kitchens.

He presents ITV’s James Martin’s Saturday Morning and has put his name to at least 27 books. His latest, Butter, was already on its second reprint the week before publication, and he recently announced that he is joining the relaunch of SpudULike, the jacket potato chain which had 37 outlets when it collapsed in 2019 before it was rescued by potato empire Albert Bartlett.

But isn’t the great British public too overcome with HEALTH anxiety after the past 18 months to go for a book about butter? “People don’t want to be lectured at, told what to eat or told to go on a bloody diet in January,” Martin says. He turned down his publisher’s request for another book on home cooking. “I said, really? Everyone’s been stuck in the house for two years.”

He has spoken before about weight gain and loss and a family history of heart disease. Is a book about butter his way of sticking two fingers up at killjoy health police? He has always eaten butter and cream and all fats, he explains. Illness has affected his family due to drinking and, for some, smoking. He’s lost three stone (19kg) recently because he’s been working seven days a week; there have been no fat-free diets or gym visits. He hardly drinks because he is too busy working, but would never cut out any food.

Martin considered doing a book on fat, but butter is such a big topic in itself that he decided to focus on it. “I’ve spent my entire career using butter without compromise and without substitute, mainly because there isn’t one,” he writes in the introduction to Butter. “The taste depends solely on where the cream comes from, which in turn depends on the breed of cow as well as the pasture it feeds on - the whole process is a simple but complex one.”

France has always been seen as the homeland of great butter; look out for Échiré, Lescure and Beurre d’Isigny. But Martin points out that the British butter industry, as with cheese, has vastly improved and small producers such as Ampersand, Briddlesford, Fen Farm and the Edinburgh Butter Co are leading the charge.

If you need any more convincing, he’s roped in some chef friends to sing butter’s praises.

“There are times when butter can make miracles happen,” says José Pizarro, the Spanish chef who has just opened his fourth restaurant, at the Royal Academy of Arts in London.

Paul Ainsworth likens it to salt. “It can simply transform food from the ordinary to the sublime.”

“Horseshit,” says Martin. “Two elements away from plastic. I don’t want to eat anything that’s made in a test tube. I want proper food.”

He’s found that his demonstrations on how to make butter are popular because people often admit to not really knowing what butter is - churned cream.

The solids leave behind buttermilk which is rarely specified in British recipes, but it has a rich and tangy taste and is common in Irish and US baking. Soda bread is an easy way to use it up. In Butter, Martin suggests buttermilk pancakes, panna cotta and crispy buttermilk chicken.

What if food shortages are holding us back in the kitchen? “Don’t blame bloody Brexit, get off your arse,” says Martin. “It’s not Brexit, it’s the perfect storm of everything.

“It’s about the way we, as Brits, think of food. We’ve become reliant on convenience. We expect carrots to be washed for us and strawberries on the shelves in November. When it’s not all there, we kick off.”

Is he pro-Brexit? “Oh no. We’re Europeans and I’m in hospitality. But we can’t turn the clock back. You’ve got to get on with it.”

‘Butter: Comforting, delicious, versatile’ is out now (£22, Quadrille), with photographs by John Carey